Life aboard a destroyer in WW2

There were about 80 V & W Destroyers built in 1914 - 1918.  All were named with a V or W starting their name.  These ships were laid-up in reserve at various ports when WW2 was declared.  They were all taken out of 'moth balls' and made ready for various duties. 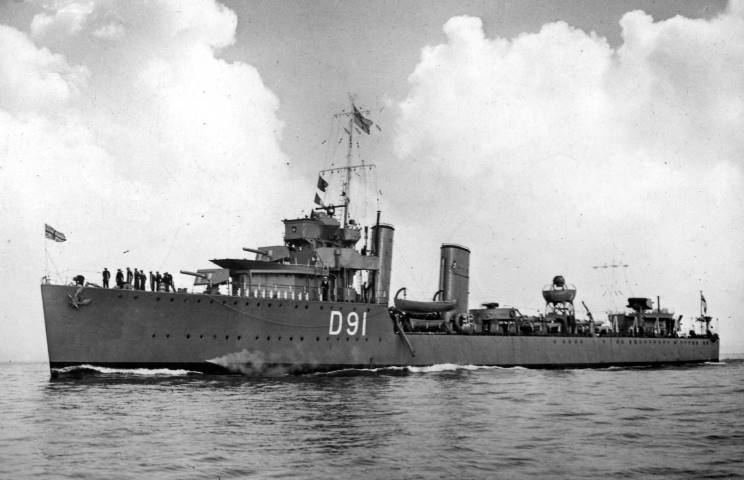 HMS Viceroy was built in 1918 and at the commencement of 1939 she was converted to the Wear Class.  This meant that the two gun emplacements on the forecastle were removed and dual 4 inch replaced them - the same occurred with the guns on the stern.  Thus Viceroy still had four guns but these could be used to fire at sea level targets or at aircraft attacks.  The main duty of 'Wear' class destroyers was as convoy escorts. There were two sets of four machine guns placed where the torpedo tubes were - these were said to aid air attacks but were really useless as they jammed far too easily.  A pair of Beaufort Guns replaced these later.  There were about 30 depth charges for submarine attacks.  The weight of these destroyers was about 1200 tons - quite small compared to current ships!  Viceroy was capable of 31 knots - a useful speed in an emergency.  There were seven officers and a doctor aboard with a crew of about 110.  Radar was at that time unknown so there was a great reliance on look-outs to ensure our safety.

There were no showers or baths - just a cubicle with six basins so we had to go to the galley and hope that the cooks could give us some hot water to shave and wash - we got an allowance of 6d a day for this lack of amenity.

At Rosyth there were about 20 destroyers of various types - 14 would be on convoy duty as it was the practice to have a convoy from the Forth to the Thames every day and vice versa.  The south bound convoy would pass two coming north en-route.

I joined Viceroy in November 1940 as a Supply Assistant in charge of the Naval stores on that ship.  I was given a place in Mess 7 - my shipmates were a Writer, a Sick Berth Attendant, two Chefs, seven Telegraphists, three Coders, three Signalmen plus me.  The area of our Mess was about 22 feet by 9 feet, so there was not a lot of room if we were all in the Mess at the same time!!  There were hooks for only nine hammocks, so two slept on lockers, two on the tables and one on the stools put together.  The Writer slept in his office, the Sick Berth Attendant slept in the Sick Bay and I slept on a camp bed in my Store Office.  I have to admit that we were rarely all in the Mess at the same time as some would be on watch.  We had what was called 'canteen messing', two members of the mess were assigned each week to prepare the food and then take it to the galley for the cooks to cook!  I enjoyed my turn as my Mother had taught me how to prepare and cook food.

On the night before each convoy left the Forth, the Viceroy would go to Methol at the mouth of the river and act as anti-aircraft ship for that night.  The next morning Viceroy would muster the ships going to be convoyed south and another destroyer would come from Rosyth to lead the convoy - Viceroy occupied the stern area of the convoy.  On the way south, ships would leave and join at various east coast ports.  The convoy channel had minesweepers ahead to ensure that the channel was clear of mines.

When we arrived at Flamborough Head on the second morning, we went to action stations and remained there for the next day and a half.  This was because the German aircraft would suddenly appear and drop bombs on the ships.  We and our assiciate destroyer aimed to drive them away by gun fire - we rarely hit an aircraft but they clearly did not enjoy being over the convoy thank goodness and so did not hang about for long!!  When we arrived off Harwich we were supported by several destroyers and they took station for the night on the eastern side of the convoy to repel e-boats that used to lay in wait for us - they attached themselves to the buoys that marked the channel and when we approached roared into action to attack the convoys going both south and north that passed one another that night.  All hell would be let loose as the merchant ships fired their weapons at what they though was a target - that could be a little scary at times...

On arrival in the Thames on the third morning we left the convoy in the hands of the Thames Squadron and proceeded to Sheerness to replenish our fuel supply.  We took on fresh meat and vegetables  - we did not have a fridge and so fresh produce lasted usually two days and then we were having to use tinned meats and vegetables.  The next morning we sailed with the north bound convoy.

After about six trips we had a 'boiler clean' at Rosyth and half the crew had four days leave.  Those left on board cleaned the ship and renewed paintwork where needed.  Work was at a faily leisurely pace.  There was evening leave ashore for half of those still on board - most went into Dunfermline for a beer and food.

Having completed the boiler clean we resumed convoy duty and after a further six trips came back into Rosyth for another boiler clean and so the other half of the crew went on four days leave.  When it was my turn, the journey to Brighton was a somewhat tedious journey as was the return of course.  That took some of the benefit by living so far south!

The Viceroy was a good sea boat, but had an open deck from forward to aft.  Storm wires were fitted with rope and holders were available to get safely along the deck.  As my store office was near the stern, I was grateful for that safety measure.

Life aboard was generally a happy time for me and I made many friends and enjoyed their company.  I enjoyed doing the job as Naval Stores Clerk for I got to leave the ship to collect stores from the Rosyth dockyard depots and when they were needed - I make sure that I was able to do this after every trip!